“We HAVE to do kayaking” my sister and I insisted, despite the fact that we knew kayaking is never our strong suit.

But then, we were in Gorges du Verdon!

Gorges du Verdon isn’t called gorges for nothing. Well for a start, the word gorges does actually mean what it literally means : a narrow valley between hills or mountains – according to Google. But then, Gorges du Verdon is super gorgeous! It is called Europe’s most beautiful river canyon, too and I do not beg to differ.

The gorgeous Gorges du Verdon is located in Southeastern France and around 2 hours of very beautiful drive from Nice. Yes, it is in the Alpes-de-Haute-Provence region and we actually passed by Plateau de Valensole, the seemingly endless lavender field that only blooms for few short weeks of the year around May or June. Since we visited back in August, the lavender had already been harvested and we didn’t get to see them bloom but oh, what a good reason to come back!

Anyway to get the facts straight, Gorges du Verdon is almost 25 kilometres in length and in some parts, 700 metres deep. Since we stayed in nearby town Moustiers-Sainte-Marie the night before, it was sensible to start kayaking at Lac de Sainte Croix which happens to be only 10 minutes away from the town. 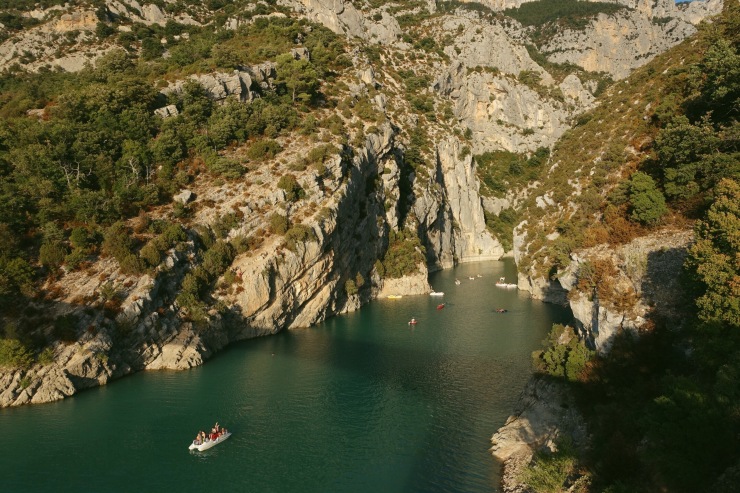 We were planning to do it close to sunset time, which was around 6.30pm to avoid the heat and doh, it means golden hour! Unfortunately, we didn’t check the opening hours of the kayak rent and we discovered after we went to Lac de Sainte Croix that we arrived 8 minutes before it was supposed to close. Oopsy daisy, but luckily we still managed to take few pictures of Lac de Sainte Croix at the golden hour. Look at that deep turqoise water!

We came back the next day arriving earlier to avoid the crowd – in case you haven’t noticed, we’re all about avoiding heat and crowd, which was not easy to do in the European summer! But we succeeded this time because the line grew very fast once we were there, yash. We also decided to grab canoe instead of kayak (see the difference) and with that, we were off! 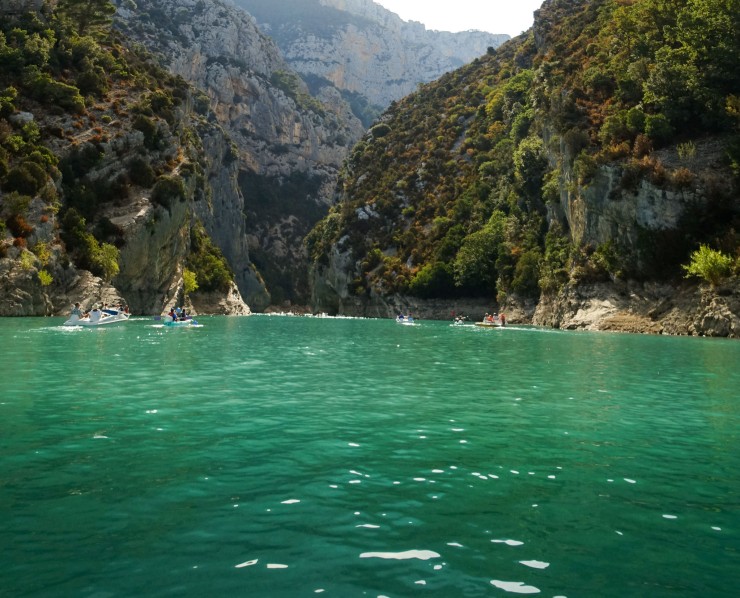 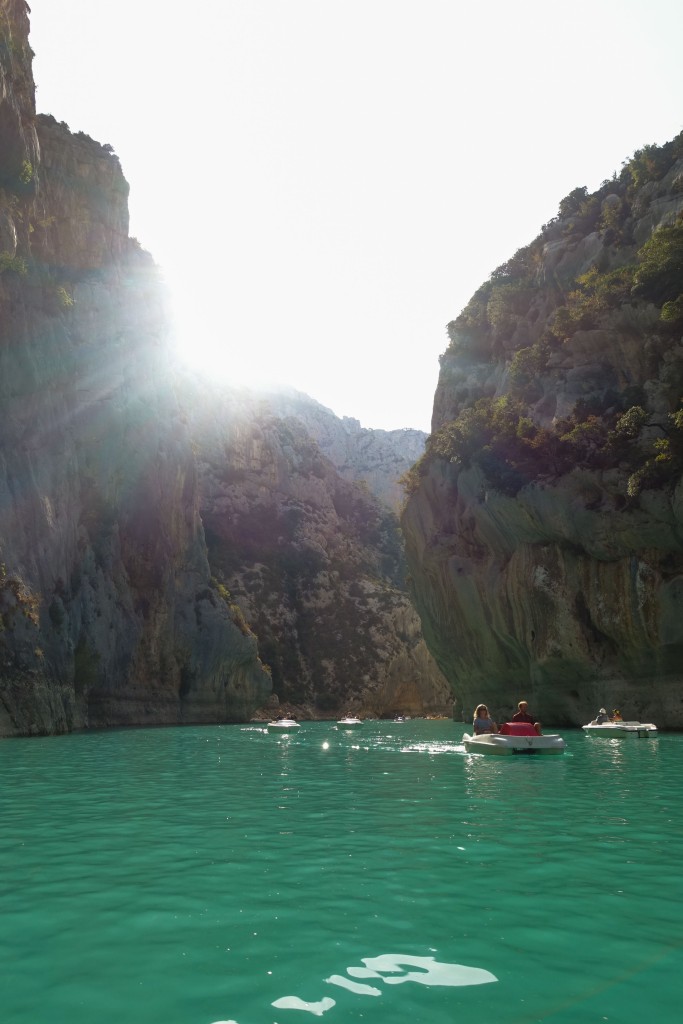 Do you see the colour? That deep turqoise got some sunshine in them and it just lit up and sparkled! It was hands down one of the most beautiful places I have ever been to. We passed by Gorges du Verdon from afar the day before and while it looked beautiful, once we got on the water and gazed up – it was absolutely the most incredible sight! I know I sound hyperbolic but it really is that amazing.

Since it’s not open water, the canoeing part was also very easy to do and actually very relaxing. The water was super pristine, mainly due to the fact that the boats we saw were mainly electric- or human-powered. FYI, the choices are not limited to only canoe and kayak, but if you are in a bigger group there are pedal boats that allow 4-5 people on board. If I’m not mistaken, we paid 25 Euro to use the canoe for one hour and I’d say it is a must do if you are traveling by car in Provence area! 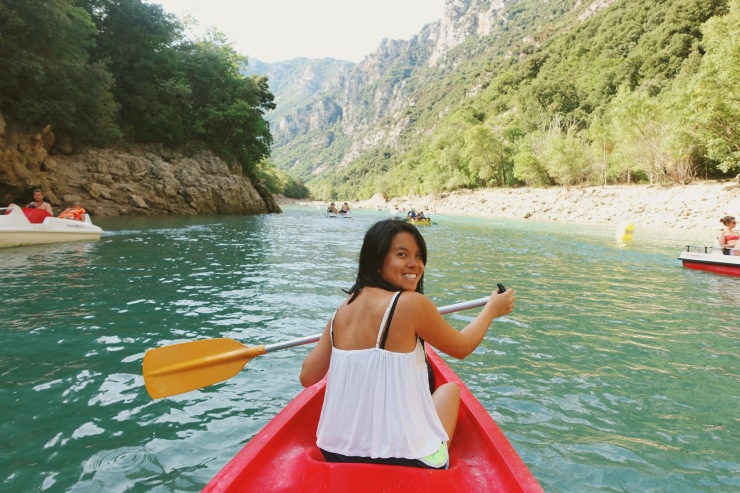 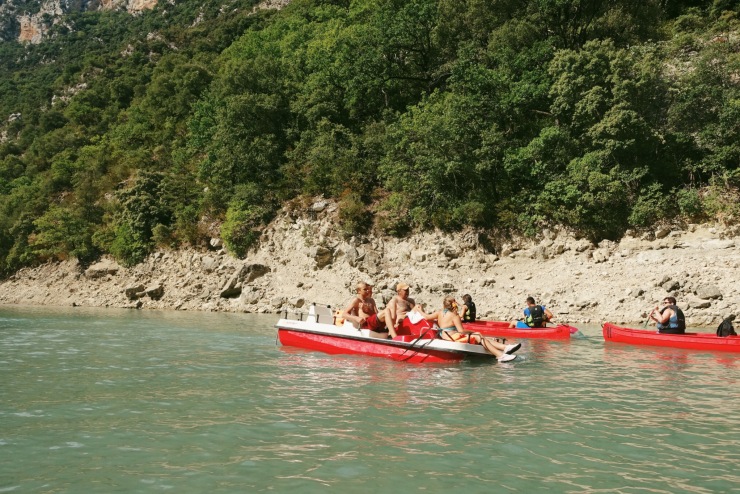 The canoe requires 2 people to paddle and as per usual, my sister purposely sat on the second row while my brother-in-law and I were hard at work! 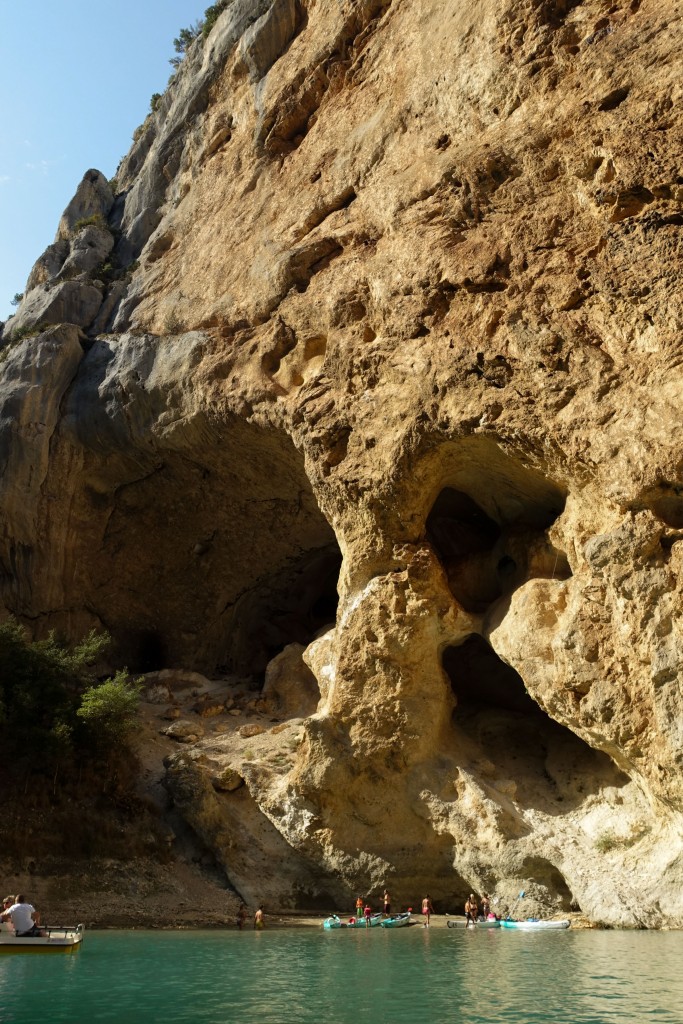 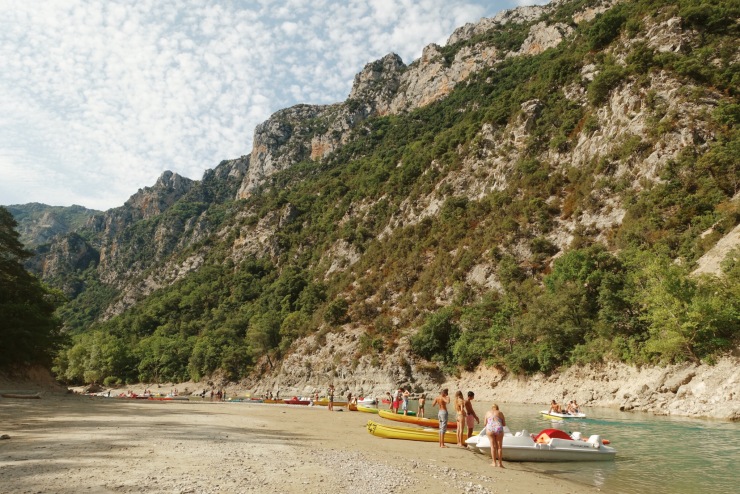 Halfway through, we found this bed of dry ground where we took a quick break and snapped some pictures. Beside canoeing, kayaking, paddle boarding, pedal boating and all that stuffs, you can also swim in the lake. The temperature was rather pleasant, or so said my brother-in-law who took a dip, just mind your head! We also saw few brave people who climbed few metres up the rocks to jump, but I guess it’s not for me. 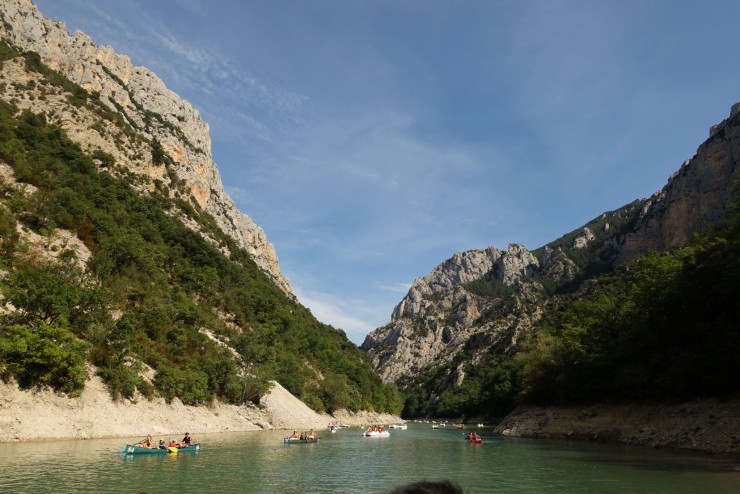 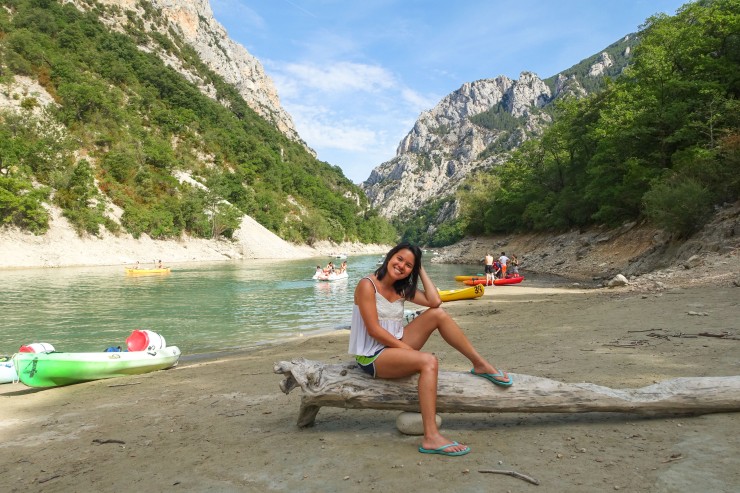 Showing off some muscles from the amount of paddle boarding and canoeing I had to endure. Nah, I actually enjoyed it A LOT.

Despite the relaxed pace, for us we decided that an hour of canoeing was enough to explore the crevices and the beauty of Gorges du Verdon. We barely made it back to the shore before we got charged an extra hour, but we did and drove back to Moustiers-sainte-marie for a big, satisfying brunch! 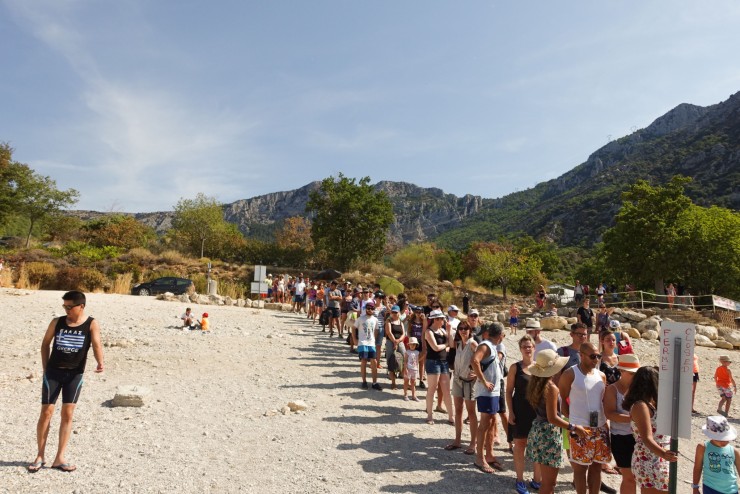 And oh, look at the line by 9.30 am. You’ll definitely want to come earlier. Put a dollop of sunscreen on you and a bottle of water, and maybe some snack or (bless me) sandwiches, heck – have a picnic in the midst of Gorges du Verdon, you won’t regret it. 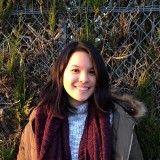 Moustiers-Sainte-Marie : A Day in a Fairytale Town